Not sure which mutual fund to buy? You might want to consider the mutual fund manager instead. 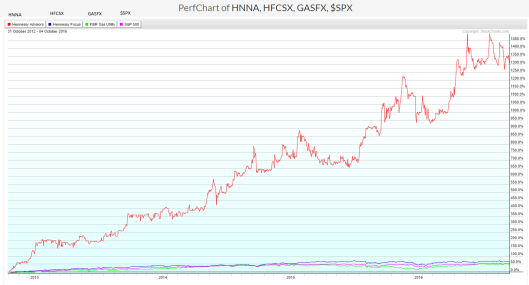 Hennessy Advisors (HNNA), the red line in the above chart, is a publicly traded stock mutual fund manager.  The other lines represent its two largest mutual funds as well as the SP500. Any questions?

Mutual Fund manager Hennessy Advisors (HNNA)  is a tiny, overlooked player in the investment advisor business with 16 open ended mutual funds holding combined assets under management (AUM) of 6.6 billion. The company started its first mutual fund in 1996 focused on quantitative factors. Later, the company added a broader range of more traditional equity funds through acquisitions for other fund companies.  Today, over 70% of its assets are less than five years old with the largest jump resulting from the purchase of FBR’s mutual funds in 2012. More recently, on September 23, 2016, the company obtained 440 million in new assets from the Westport fund management company growing AUM by an additional 7%. Due to the advantages of scale in the mutual fund industry, earnings from the acquisition should increase by a slightly higher amount, say 8-10%.

Hennessy is currently priced substantially below its peers based on its current earnings trend. Due to the company’s small size (174 million market cap), fund concentration and low liquidity, a discount to peers of 10 – 25% would be reasonable, but the current  50% discount seems  excessive especially in light of the recent Westport transaction.

To acquire Westport, the company paid 1.75% of the 646 million in assets at the time of the agreement or 11.3 million, even though it appears that only 440 million in assets remained in the fund by the time the transaction completed. [edit – I originally wrote that the purchase price was based on assets at close date, but actually it was based on AUM at agreement date – my mistake].  The assets were merged into the Hennessy Cornerstone Mid Cap 30 Fund which will charge 1.0% of fund assets annually (4.4 million) for fund expenses and shareholder services. With less than a three year payback, this acquisition should yield strong returns, but that’s only if most of the customers’ funds remain with Hennessy.

In the bull case, the clients who own the Westport funds will appreciate the lower fees and better record of the Mid Cap 30 Fund and want to stay.  Additionally the transaction preserves continuing fund holders tax basis, while creating a tax liability for those who chose to sell instead of stay. But, Hennessy’s record for keeping assets is stronger when they retain the existing fund using a sub-advisor than when they merge, so the move for higher fees may raise  asset flight.

Lastly, the acquisition of mutual fund companies creates an accounting asset on the acquirer’s balance sheet that gets amortized over time increasing cash earnings. In 2016, the company will record a deferred tax asset of approximately 2 million due to amortization so cash earnings are about 8% higher than reported earnings.

Market Sensitivity: Hennessy’s fee generation is directly tied to market performance and fund holder retention. While no one complains about this in the good times, in a down market not only will the value of the funds’ assets drop, but the lower prices will also scare investors into redeeming their shares dropping AUM even further. This is why leveraged companies do and should sell at discounts.

Concentration Risk: The Hennessy Focus Fund (HFCSX) is Hennessy’s largest fund with 2.4 billion or 36% of all Hennessy assets under management. Morningstar gives the fund a five star rating a special Bronze star analyst rating. The second largest fund with 1.46 billion or 22% of AUM is the Hennessy Gas Utility (GASFX) Fund with four stars from Morningstar. For those counting, 58% of the assets are in just two funds.  As these funds go, so goes the bottom line of Hennessy Advisors.

Management Compensation: The CEO, Bill Hennessy, is also the founder and largest owner with 30% of the shares outstanding.  In 2014, he made a sweetheart contract for his services and collects 10% of the net profits each year.

Mr. Hennessy is entitled to receive a quarterly incentive-based bonus in the amount of 10% of the company’s pre-tax profits for each fiscal quarter, as computed for financial reporting purposes in accordance with accounting principles generally accepted in the United States of America, except that pre-tax profit is computed without regard to (A) bonuses payable to employees (including related payroll tax expenses) for the fiscal year, (B) depreciation expense, (C) amortization expense, (D) compensation expense related to restricted stock units (or other stock-based compensation expense) and (E) asset impairment charges (such amount, for each quarter, the “Quarterly Bonus”).

Wow, nice work if you can get it!  Fortunately, his ownership stake is  18 times greater than his his 3.3 million compensation in 2015, so he is still well motivated to build shareholder wealth.  His leadership team is also highly paid with his CFO and Executive Vice President making $1.3 and $1.0 million in 2015 as well.

Neil Hennessy is only 58 and show no signs of selling the company.  Eventually, when the company does get sold years from now, the acquirer will likely already have a President, CFO, and EVP, so the 5.6 million in bonus and salary can be eliminated which will increase the value of the company six to eight times that amount over its worth as an ongoing investment with the extra salary.

A look at some numbers: 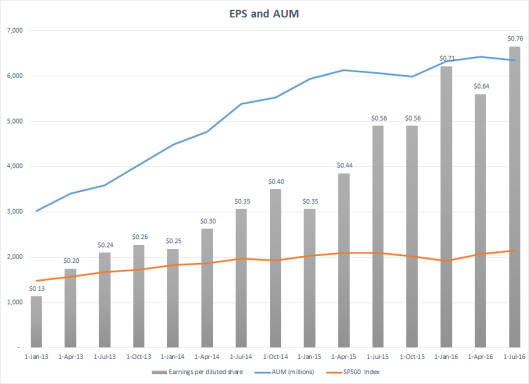 Comparable Companies: While Hennessy does not have any publicly traded micro cap peers, larger investment managers in the 2.5 to 8 billion market capitalization range like Janus Capital (JNS), Federated Investors (FII), Legg Mason (LM), Eaton Vance (EV), and Affiliated Managers Group (AMG) have P/E ratios for 15-18 compared to 11 for HNNA. While P/E’s are easily manipulated by debt, in this case several of the larger companies are carrying proportionally more debt than Hennessy as well.

Management: While I think they are overpaid, Hennessy management is competent and adaptive. The company has adjusted its strategy over the years to grow the business by adding funds and providing more services, they are survivors of the 2008 financial crisis, and they have successfully integrated acquisitions.  But I’m not impressed with the board, it includes family members and appears more typical of a 15 million nano-cap than a 175 million small cap. At the end of the day you have to be comfortable with Bill Hennessy as the CEO/Chairman and not expect much from the board; fortunately, he did build this company after all and  appears to know what he is doing.

So is Hennessy cheap? Yes, but there is a reason mutual fund companies sell at a discount to the market. For Hennessy to continue growing at 15-20%, several trends must continue to be favorable: general market performance needs to remain bullish, the company’s largest funds (Focus, Gas Utility) can’t have bad years, newly purchased fund assets need to be at least somewhat sticky, and new acquisitions must be available for purchase at fair prices.  I’m not betting the company goes five for five on that list, but then I also don’t believe the price I am paying requires perfect execution either.

Conclusion: I recently bought Hennessy Advisors stock because I don’t believe the positive earnings trend is priced into the stock. But due to the inherent leverage in a market leveraged investment, the concentration of the majority of assets in just two funds, and the secular headwinds facing all actively managed equity funds I cannot justify over-weighting the position, but I expect it to continue performing better than the overall market until the next recession (whenever that is).